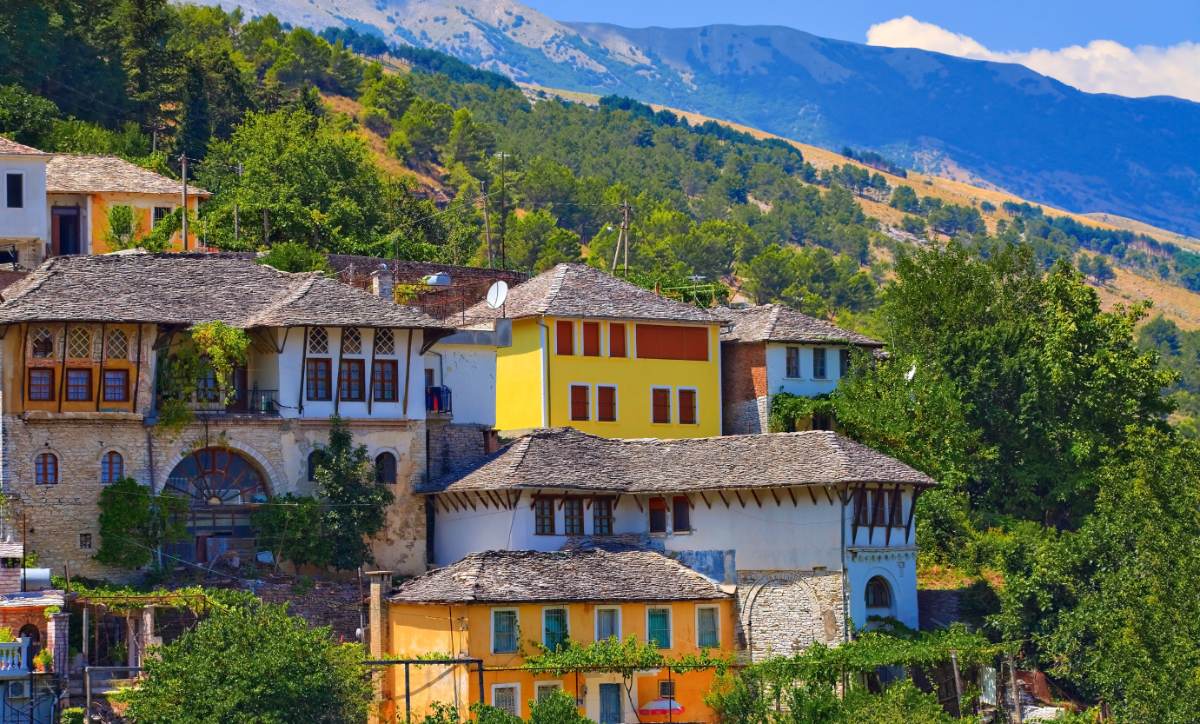 How to get from Saranda to Gjirokaster? Bus, Taxi, Car

In this blog post, I will describe what it is like to travel by bus from Saranda to Gjirokaster, including the location of the bus station and bus pricing. I will compare taxi rates from Saranda to Gjirokaster. And I will compare car rental rates of different Saranda-based car rental companies. I will also describe different routes to drive, how long it takes and train travel in Albania.

Best ways to get from Saranda to Gjirokaster by bus, by taxi or by car

How to get from Saranda to Gjirokaster by bus?

The buses from Saranda to Gjirokaster depart only during the daytime hours, between 6 AM and 5 PM.

What is going to happen, is that you will arrive at the street between Friendship Park and the archaeological ruins of the Synagogue – Basilica. You will then need to approach different bus agencies and bus drivers to ask at what time the next bus from Saranda to Gjirokaster will depart.

Although bus timetables are published online on the website of Gjirafa Autobus, the buses may or may not depart according to those timetables. Of course, you can travel from Saranda to Gjirokaster by bus, but you will need to ask around at the bus station and wait for the next bus departure. It may feel confusing and unorganized as a foreigner, compared to bus travel in the USA or Western Europe, but this is how bus travel in Albania works. 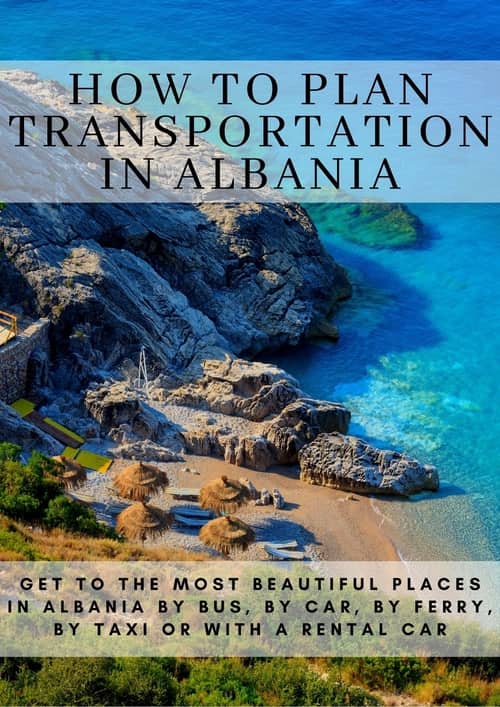 The Saranda bus station is located between Friendship Park Saranda and the archaeological remains of the Synagogue – Basilica.

In essence, the Saranda bus station is a street in the centre of Saranda where several buses stop and agencies are located alongside the street. So you may need to walk up and down Rruga Flamurit street and Rruga Onhezmi street, to ask different agencies for their next bus departure.

Buses in Albania are operated by independent operators, which each have their own bus timetable. These timetables are not followed very strictly, so asking around and a bit of waiting will be required, when you travel by bus in Albania.

You can see the location of the Saranda bus station on a Google Map here: https://goo.gl/maps/baKcb7hbrWJGBvJU7 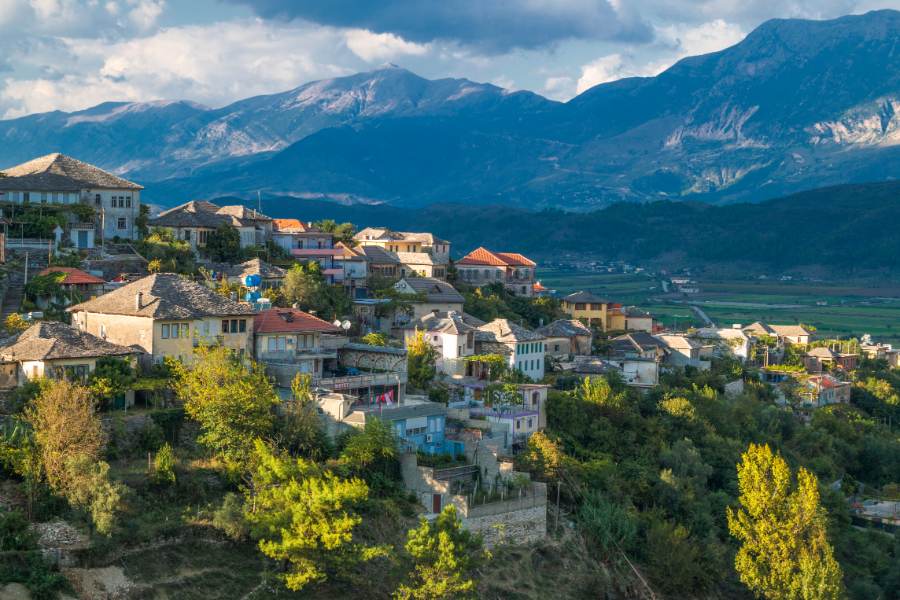 The bus station is located at the foot of the hill. And the old town centre and UNESCO site is on the top of the hill. So it is a long and steep climb up to the old town. It is definitely worth taking a city bus or taxi to the town centre, to save yourself from the steep hill climb. 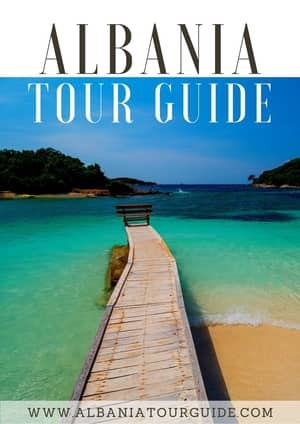 How much does it cost to rent a car and drive from Saranda to Gjirokaster?

It costs at least 20-25 euros to rent a car and drive from Saranda to Gjirokaster. To give you a good insight into the prices of car rentals in Saranda, I have reached out to several car rental companies in Saranda and compared their rates.

Of course, if you are travelling to Albania in July or August, car rental rates may be higher, because that is in the middle of the high season.

There are two different routes that you can drive from Saranda to Gjirokaster. There is the new road, which goes from Saranda via Kardhiq Castle in the direction of Tepelene. However, as a tourist, it is actually better to take the old road via Muzine to Gjirokaster. Because the old road is a beautiful route through the mountains and it passed by the Blue Eye Spring. So start your day early, and plan to be at the Blue Eye spring around 9 AM for about 1 hour, then continue your journey onwards for Gjirokaster. 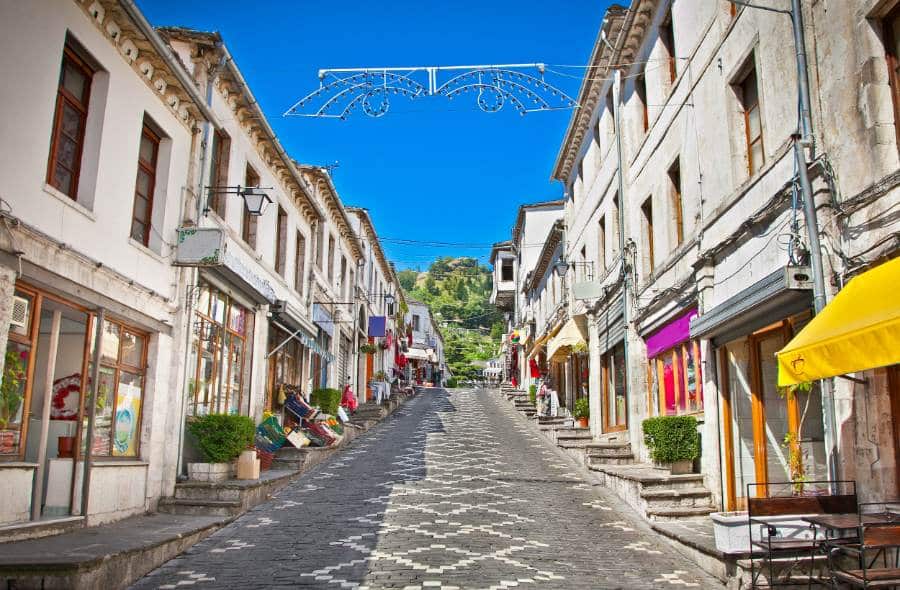 How long does it take to get from Saranda to Gjirokaster?

Because the Furgon minibuses in Albania do often make several stops along their journey to let extra passengers on the bus or let passengers off the bus. It may be the exact same route that is driven, but minibuses are simply slower.

Can I get from Saranda to Gjirokaster by train?

You cannot get from Saranda to Gjirokaster by train. There is no railway track between Saranda and Gjirokaster.

The old railway tracks in Albania were all constructed during the communist period, for the first time in Albania. The railway network never extended as far south as Saranda or Gjirokaster. The furthest south was Vlore.

Although many of the old railway tracks are visible in the Albanian landscape, the railways are mostly not used. Because since the fall of communism in 1992, there has been little to no investment in the maintenance and refurbishment of the railway network and trains. Therefore, as little as 2-3 trains per week are operational in the whole country. This is why the Albanian people prefer to travel by minibus “Furgon” or by car. 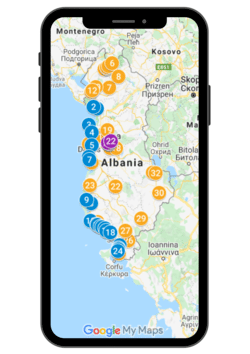 Is Gjirokaster worth visiting?

Within Albania, Gjirokaster is known as a “museum city”. And that is what Gjirokaster is truly like. You walk through the old town centre and you really get a feel of what life was like during the 17th century in Albania. When Albania was a part of the Ottoman Empire, just like the rest of the Balkans. 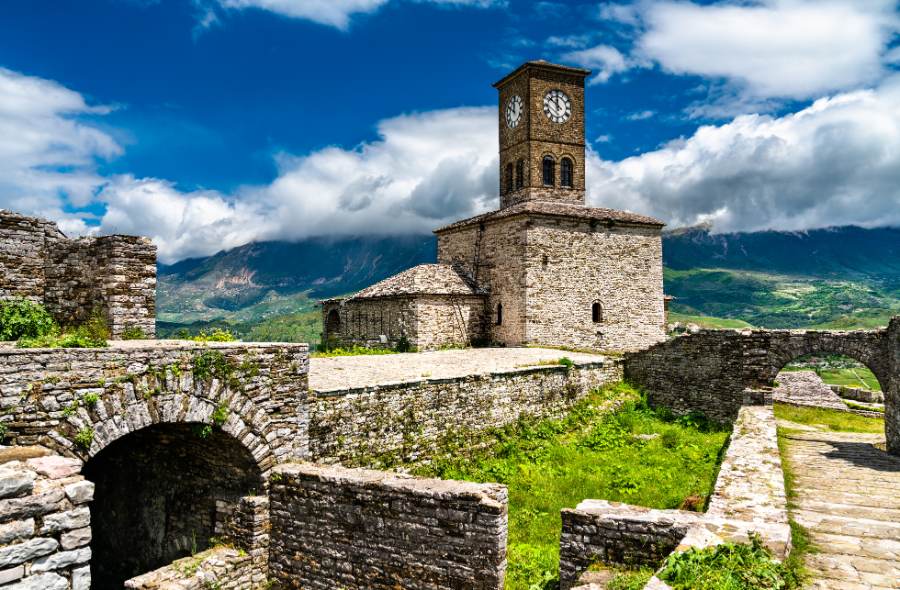 What to do in Gjirokaster?

The Gjirokaster Castle is a large fortress on the top of a hill in the city. The fortress has a spectacular view of the historical city and the traditional stone houses of Gjirokaster. It is one of the biggest hilltop castles in the Balkans and it dominates the city. The castle was originally built in the 12th century by the local Byzantine government. But it was renovated and additions were made during the Ottoman empire and the government of King Zog. From 1930 onward, it was mainly used as a prison for people who were resistant to the government.

The Old Bazaar of Gjirokaster is the traditional marketplace in Gjirokaster. The bazaar was originally built in the Middle Ages. There are a variety of craftsmen shops, souvenir shops and coffee houses along the Bazaar. You can buy handmade wooden pieces, handwoven rugs and delicate lace items. The street of the Bazaar is made of cobblestones and it is set on a steep hillside.

Skenduli House is a highlight for visitors to Gjirokaster. It is an original family house, which is more than 300 years old. During your visit, you will get a unique insight into what life was like for a rich family during the Ottoman period. The house has 9 fireplaces, 6 bathrooms, 12 rooms, 44 doors, 64 windows and 4 Hamam Turkish baths. The house has been owned by the same family for generations. The family will show you around the house and tell you stories about its history. One of the highlights is the room used for wedding ceremonies, with beautiful stained glass windows, carved wooden ceilings and a fireplace decorated with pomegranates, which symbolize fertility.

Zekate House is a historical townhouse in Gjirokaster city. It is a beautiful example of a traditional tower house. The house was built in 1812, and it is “one of the greatest examples of Gjirokaster architecture in the Ottoman style”. Impressive houses like Zekate House used to only belong to wealthy people, like government officials and merchants. Inside the house, you can see the original interior and imagine what it was like to live there during the Ottoman period. There are beautiful stained-glass windows, wooden ceilings and wall frescoes.

The Cold War Tunnel is a gigantic bunker underneath the castle of Gjirokaster. It was built by the former communist dictator Enver Hoxha. The dictator was paranoid about a foreign invasion or a nuclear attack. In fact, he was so convinced an attack was imminent, he constructed 173.000 bunkers all over Albania. The Cold War Tunnel bunker was constructed in secret in the 1960s, and it remained a secret for the locals until the 1990s. The Cold War Tunnel is 800 m long and it has 59 rooms, therefore, it could hold up to 300 people if needed. The bunker is empty, but the use of the rooms has been displayed on the doors. There were rooms for government ministries, interrogators, party elites, power generation, water storage, sleeping, decontamination and air filtration.

Inside the castle walls of Gjirokaster’s castle, you can visit the Museum of Weapons. The museum site was originally a prison. Albania former King Zog constructed the prison in 1932. During the second world war, the prison was used by the Italian and German forces. After the war, the communist regime used the prison to hold political prisoners. The Museum of Weapons displays arms used during the Albanian Independence struggle in 1912 and from the struggle against the Italian and German occupations from 1939 to 1944.

The Ethnographic Museum gives you an insight into the traditional lifestyle of a wealthy family in Gjirokaster. The museum’s building is on the location, where the former dictator Enver Hoxha’s childhood home was. However, the original building was destroyed by a fire. Inside the museum, you can see a display of artefacts, household items, folk costumes, clothing and kitchenware from the past.

How many days do you need in Gjirokaster?

You need 1-2 days in Gjirokaster to explore the old town centre, including the Gjirokaster castle, the bazaar market and some of the museums.

You can absolutely visit Gjirokaster on a 1 x day trip from Saranda to Gjirokaster. You can visit the Gjirokaster Castle upon arrival for a beautiful view over the city centre, then go to the Old Bazaar market for some lunch, a coffee and some souvenirs. And in the afternoon, you pick one of the museums, like Skenduli House, Zekate House or the Cold War Tunnel. You can also visit the Blue Eye spring for about 1 hour on your way to Gjirokaster in the early morning.

That being said, Gjirokaster has a beautiful old town centre and some lovely hotels and guest houses are based in the old houses in the city centre. So if you have the time to spend 1 night in Gjirokaster, that will be absolutely worth it! You can go for a traditional dinner and stroll through the market street in the evening, it is a very romantic and beautiful city. 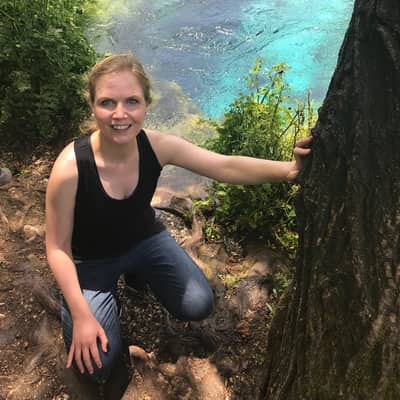